The St Ives September Festival traditionally commences with an afternoon of free street entertainment on the opening Saturday – followed by another on the middle Saturday.

This year the street entertainment programme will be sponsored by Aspects Holidays who have joined the local companies and organisations backing the September Festival for 2022. 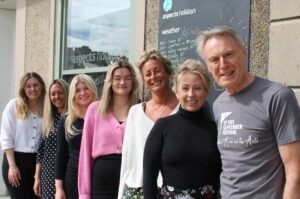 This year’s dates will be September 10 and September 17 between noon and 4pm. The venues are Fore Street and the area beside the Fishermen’s Lodge near the Harbour slipway. Don’t miss the soul-stirring  DakaDoum drum and dance group kick off the Festival on Saturday, September 10. Read more about this year’s performers below.

Formed in 2012 by Robin Tyndale-Biscoe (Percussion Director) and Sarah Hyams (Dance Director), DakaDoum is an Afro-Brazilian drum and dance group that specialises in styles from all over Brazil, including Samba, Samba Reggae, Maracatu and more. The dance director has since moved back to Oxford so her role has been filled by Anna Roberts.

This talented and electrifying group from Falmouth and Penryn aim to bring the authentic sounds of Brazil to the streets of the South West. Kicking things off on the Festival’s opening day, DakaDoum’s percussion and dance performance is sure to be a feast for the ears and the eyes.

Returning to the September Festival after a break of several years, Penzance Guizers bring the art of guising from Tudor times to the present. A happy band of musicians and dancers, they perform all types of Cornish dance and its revival history, historical folk and court dance, with an emphasis on technique.

Also returning to the Festival are Cornwall dance group Tros an Treys. Their name, meaning ‘clamour of feet’, reflects the metal taps or scoots they wear on their shoes. As Penzance’s first Cornish dance group, they choreograph new dances using Cornish steps, shapes and patterns, performing alongside lively renditions of Cornish tunes by their own band. You can’t miss their colourful costumes – red, black and silver like the Cornish chough – and spirited displays of dance!

West Cornwall-based Rick and Barry are reliably entertaining with many decades of experience in their native Yorkshire and Midlands music scenes. They balance great songs with cheeky banter and perform on a variety of stringed instruments to create a variety of lively and distinct musical styles. Rick, living in the St Ives area, is well known locally for his involvement in the music venues, and Barry is a September Festival stalwart from his many appearances here over the last 15 years.

Last year Barry brought his excellent one-man own show to the Arts Club during the September Festival while Rick appeared with the Organised Crime Collaborative at St Ia Church. They also entertained the crowds in Fore Street as part of the opening day Street Entertainment programme – and now they are bringing their show to the Arts Club on Wednesday, September 14 (Tickets on sale soon).

A musician, artist, performer, workshop tutor, and project manager based in Cornwall, Tree Stewart has been performing and teaching professionally since 2001.

The multi-talented Tree Stewart, a September Festival favourite, is bringing her globe and her contact juggling skills back to the September Festival for the first time since 2019 after missing last year as she was on tour with her prog rock band Emerald Dawn. But which of her many stunning costumes will the mesmerising Tree be wearing this year?

We are currently working on adding more performers to this year’s exciting line-up for the 2022 Street Entertainment so check back soon for more information. The pictures below are of some of the street entertainment highlights from recent years . . . and hopefully some of these performers will be returning along with some exciting new attractions!