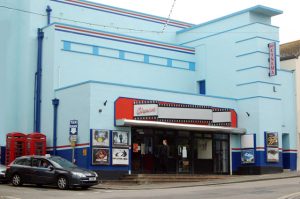 Having originally opened in July 1939, the Art Deco styled Royal Cinema recently celebrated it’s 83rd birthday. In it’s current form, it has three screens and shows a variety of newly-released films every day.

Tickets are available via the website below, by phone during opening hours (01736 796843) or from the kiosk – on the day or in advance. The website has more information about films, times and our Movie Magic discount card. https://st-ives.merlincinemas.co.uk/

The Royal Cinema will present newly-released film THE LONG WAY BACK complete with a Q&A with Director Brett Harvey and Producer Simon Harvey. Tickets on sale soon

THE LONG WAY BACK is a contemporary British road movie about relationships, regret, responsibility and ultimately love.

Penhaligon. (Under Milk Wood and Count Dracula), it is the latest offering from the team behind the hit Cornish films Weekend Retreat and Brown Willy. Pictured right: Director Brett Harvey (top) and Producer Simon Harvey (bottom).

FILM PREVIEW: The road home is never straightforward. Reluctant father David has spent his life running away: from his foster home, from his marriage, from responsibility. But now his estranged daughter Lea is leaving university under tragic circumstances and David is the only person who can make the trip to drive her home to Cornwall.

As they make an eventful car journey across Britain, revisiting old haunts and reliving old memories, David attempts to make up for a lifetime of disappointments and to reconnect with Lea . . . but is it too late? CLICK HERE to watch the trailer of THE LONG WAY BACK
Click here to BOOK TICKETS