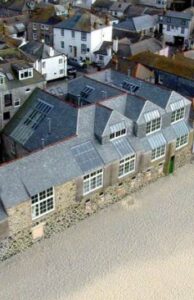 The Grade II* Porthmeor Studios in St Ives, Cornwall is probably the most iconic artists’ studios in the country. It is the oldest and has hosted some of the most illustrious artists working in Britain. The recent capital renovations won universal acclaim and several awards.
Originally built in the early 1800s for the pilchard fishery, its cellars still clearly show how this industry worked, and the building was listed Grade II in 2005 because of this evidence. Fishermen still use the cellars for storing and repairing their gear and for setting nets.
However, Porthmeor is best known for the incredible number of internationally important artists who have worked there, including Julius Olsson, Frances Hodgkins, Ben Nicholson, Patrick Heron, Francis Bacon and Wilhelmina Barns-Graham while its Borlaise Smart Room also hosts events during the St Ives September Festival. 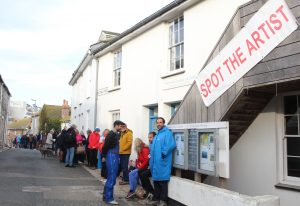 First staged in 2006, the event is now regarded as one of the best charity art postcard sales in the country outside London with many local, national and international artists donating their work which is only signed on the back. 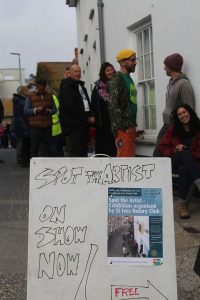 The viewing days are on the Friday and Saturday (10am to 4pm) when you can try and recognise the works on view and target your potential buys before joining the Sunday morning queue for the sale which runs from 9am until 2pm. The keenest bargain hunters will have once again “camped out” and queued overnight in Back Road West for first pick of the paintings on offer.

Proceeds, which for several years have exceeded £10,000 a year, are shared between arts organisations and other good causes supported by Rotary.