The Funny Thing About Laughter at St John’s In The Fields Church 7.30pm (drinks 7pm) 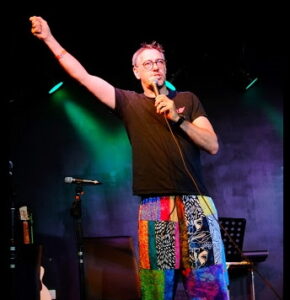 A joyous fun playful show that celebrates, explores and enables laughter! Comedian and amateur gelotologist Ian Macdonald shares his adventures and mishaps in the world of stand-up comedy, and the surprising, liberating discovery he made about laughter along the way.
Ian Macdonald is a huge fan of laughter, pursuing this mainly as a stand-up comedian, but he also runs laughter workshops, teaches comedy, and regularly speaks on well-being and laughter.
He has been performing since he made 400 vicars laugh (at the same time!) and realised that
stand-up comedy was the mid-life crisis he was searching for. Delivering his own brand of cheerful incredulity, he has been described as ‘warm,ull of heart’ and ‘very very funny.’ An evening celebrating laughter, and how we all might find a little more of it in our lives. Tickets 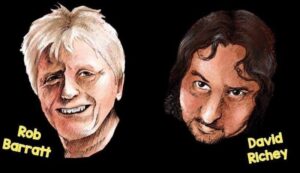 With a mix of comedy improvisation, poetry, stand-up, songs and music, laughter is guaranteed at an evening with Rob Barratt and David Richey.
They have been performing together and individually for many years, delighting audiences with their quick wit and charm.
The show comprises stand-up comedy from them both, hilarious poetry and wordplay from Rob, witty catchy songs from David, and special moments of glee in improvised scenes from the magic that comes when they spark off each other in the spirit of ‘Whose Line is it Anyway?’ Regulars at the St Ives  September Festival, they love it and are delighted to be back! Tickets