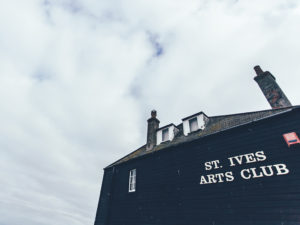 Founded in 1890, St Ives Arts Club offers membership for artists, gallery space for exhibitions and an intimate upstairs theatre for live performances.
The Arts Club is a major September Festival venue, hosting a varied range of events throughout the fortnight.
The events listed below – with more to follow – are currently being arranged by the Arts Club with full information and ticket-booking details to come soon.

The St Ives theatre group – based at the Arts Club – will present their latest production. More details to come. 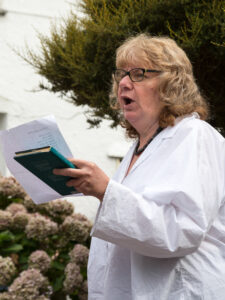 Poet and writer Evelyn Hollway, a Norway Square regular who spends her time living between St Ives and Vienna, will launch her latest book.
Evelyn’s play Graphite & Co has entertained Arts Club audiences at the last two September Festivals but this year she embarked on a new project.

Last year Barry Hunt brought his excellent one-man own show to the Arts Club during the September Festival while Rick appeared with the Organised Crime Collaborative at St Ia Church. They also entertained the crowds in Fore Street as part of the opening day Street Entertainment programme – and now they are bringing their show to the Arts Club.
West Cornwall-based Rick and Barry are reliably entertaining with many decades of experience in their native Yorkshire and Midlands music scenes. They balance great songs with cheeky banter and perform on a variety of stringed instruments to create a variety of lively and distinct musical styles. Rick, living in the St Ives area, is well known locally for his involvement in the music venues, and Barry is a September Festival stalwart from his many appearances here over the last 15 years. Performing together they provide a great night of revelry to lift the mood. Tickets on sale soon 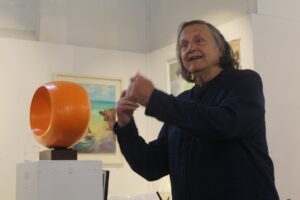 The Festival’s Big Frug tradition, hosted by performance poet Bob Devereux, continues with a host of musicians, poets and other performers from near and far converging on the Arts Club once more. 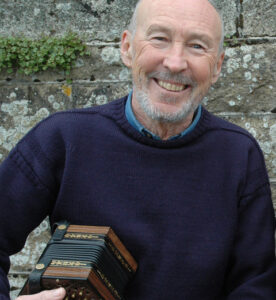 St Ives-based folk singer and squeeze box player Alistair Brown returns to the Arts Club following his 2019 sell-out show.
Born in Scotland, and for many years resident in St Ives, Alistair has travelled the world with his  folk songs and stories. Audiences at concerts and festivals across North America, Australia, New Zealand and the UK have responded enthusiastically to his performances, covering the field from comic ditties, songs of struggle (usually unsuccessful) against temptation, odes to conviviality and songs of unashamed sentimentality, to outrageously funny stories from a master of the art.
His last festival show at the Arts Club in 2019 played to a capacity audience, and he’s looking forward to welcoming everyone back again for an evening of song and laughter. Tickets on sale soon 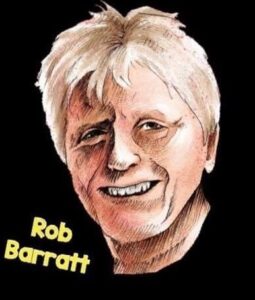 Rob Barratt and friend(s) will be back at the Arts Club for another night of impro comedy – and so much more! Full details of the show and ticket details will be announced soon. 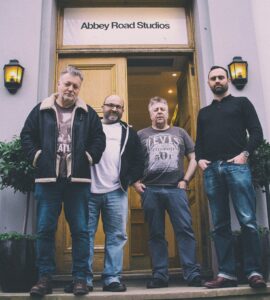 Yorkshire singer and musician Martyn Barker – a regular St Ives Festival visitor – is bringing his Tea Band back to the September Festival. Martyn Barker, a guitarist, songwriter and singer has been gigging around the country since 1974 when he had his first school band The Old Dog Blues. He is influenced by Jazz, Punk, Blues, RnB and Folk which always comes out in his performances.
Martyn,  no stranger to St Ives, has been coming down and performing at the September Festival since 1997 either playing a solo set on acoustic guitar or with his group The Tea Tand. The Tea Band are Tom Buttler guitar, Simon Brooks drums,  stand-in bass player Stephen Norris and Martyn on guitar and vocals. Tickets on sale soon

A second chance to see Richard Curnow’s one-man take on The Bard.

Friday, September 23 -LONG FOR THE COAST 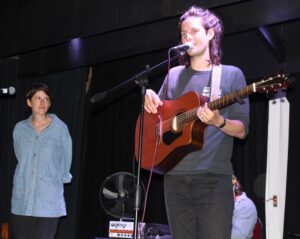 The indie folk duo made their St Ives September Festival debut at the Arts Club last year at short notice – and enjoyed it so much that they insisted on returning.
Honest, endearing, and fiercely hopeful, Totnes-via-Bristol-based Long For The Coast – Jamie and Sophie Gould – believe that “music is community”.
They sing stories about social change, spiritual adventures, and close friends lost and found.
Long For The Coast are known for their close-knit harmonies, straight-to-the-heart lyrics and genteel finger-picked guitar. Tickets on sale soon